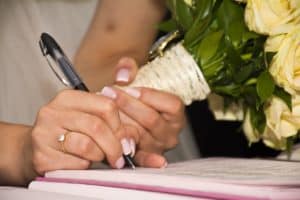 Supreme Court of Queensland reduces amount guaranteed by a volunteer wife even though she obtained independent legal advice.

In Dowdle v Pay Now For Business Pty Ltd & Anor [2012] QSC 272 the Supreme Court of Queensland considered the issue of misleading and deceptive conduct where a wife sought to have a guarantee and mortgage set aside even though she had received legal advice prior to executing a mortgage and guarantee to secure monies advanced to her husband.

The first defendant (Pay Now For Business) sent a letter of offer to Mrs Dowdle (the Plaintiff) for a loan of $50,000 to be secured by her property. The funds from this loan were however to be used by Mrs Dowdle’s husband. Mrs Dowdle accepted this offer.

However, the lender sent a subsequent letter of offer to Mrs Dowdle’s husband. This was done without advising her that the initial offer had been withdrawn. She subsequently signed a new guarantee and mortgage. This made her liable for the loan to her husband of $50,000 as well as all of her husband’s existing debts to the lender. She did not understand the effect of the transaction at the time she signed the guarantee and mortgage. Instead she was under the belief that the documents related to the original letter of offer sent to her.

The court needed to decide whether the failure by the lender to advise Mrs Dowdle of the change in structure of the transaction amounted to misleading and deceptive conduct.

Mrs Dowdle relied on three grounds to set aside the guarantee and mortgage. The lender:

The lender relied on Goodwin v National Bank of Australasia Ltd (1968) to support its assertion that a lender is under no obligation to disclose information to a surety of a customer in respect of the customer’s present and future indebtedness to the lender. Justice Mullins accepted that this case was still authoritative. But noted that its application could be impacted in the event of unconscionable or misleading and deceptive conduct.

Justice Mullins held that the general principle outlined in Goodwin could be rebutted where there is evidence of misleading or deceptive conduct following the authority of Commercial Bank of Australia Ltd v Amadio (1983). Mr and Mrs Amadio were elderly migrants with limited English skills. Their son asked them to mortgage their property in favour of the bank. The bank manager went to Mr and Mrs Amadio’s home to have them sign the mortgage. Mr and Mrs Amadio did not read the document. And the bank manager did not explain the mortgage because he was under the belief that the son had explained the transaction to them. Importantly, Mrs and Mrs Amadio were under a false belief as to the liability they were securing.

To determine whether the lender’s conduct was unconscionable, Justice Mullins cited Garcia v National Bank of Australasia Ltd (1968). This case concerned a similar transaction involving a husband and wife. The husband had amassed a significant amount of debt to the bank arising from multiple business ventures. The husband and wife separated and divorced after the agreements with the bank were entered into. The majority of the High Court identified that for conduct to be classified as unconscionable, the circumstances would have to be that the:

Trust and confidence in husband

Justice Mullins noted that even though Mr and Mrs Dowdle were separated at the time she signed the guarantee and mortgage, they were still married. And it was because of this that she entered into the agreement. Mrs Dowdle did not understand the effect of the transaction at the time she signed the guarantee and the mortgage because she was operating under the belief that she was signing documents consistent with the original offer sent to her. The transaction was voluntary as she was to obtain no benefit, with all funds being directed to her husband. The first defendant knew that the Dowdles were married. And should have inferred that Mrs Dowdle reposed trust and confidence in her husband. Also that Mr Dowdle might not have adequately explained the transaction to her.

The lender asked Mr Dowdle to arrange for independent legal advice to be given to Mrs Dowdle. However, the legal advice process was undermined by the lender failing to notify Mrs Dowdle of changes to the transaction. Also, the lender was unable to rely on a clause in the contract excluding any obligation on it to disclose to Mrs Dowdle anything relating to the affairs or transactions of her husband because its unconscionable conduct had ‘tainted’ the entire transaction.

Mrs Dowdle was accordingly able to establish unconscionable conduct based on the principles outlined in Garcia. Although there were no facts alleged in her case to support a conclusion that she was under a ‘special disability’ as per Amadio.

It was for Justice Mullins to decide whether the mortgage and guarantee should be set aside in their entirety. In Amadio, Justice Dean held that a mortgage should be set aside where unconscionable conduct has tainted the transaction. But only to the extent that it imposed a liability in excess of the liability intended to be undertaken. Because Mrs Dowdle was willing to mortgage her property to secure the $50,000 loan, the transaction was not set aside in its entirety. Rather, the operation of the guarantee was modified so that it reflected Mrs Dowdle’s intended undertaking to guarantee an amount of $50,000.