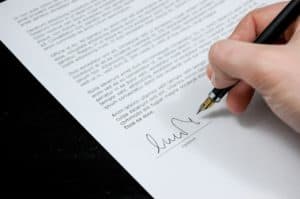 All monies mortgages still in use despite repeated warnings about exposure to the lender.

In Hunt & Hunt Lawyers (a firm) v Mitchell Morgan Nominees Pty Ltd [2013] HCA 10 the High Court was required to consider whether the liability for damage suffered by a lender was solely attributable to the negligent conduct of the lender’s solicitor or whether a proportion of this liability could be attributed to the fraudulent conduct of other parties.

Mr Caradonna and Mr Vella opened a joint bank account for their business venture (a boxing event to be held in late 2005). On that same day both parties attended Mr Vella’s solicitor and took possession of certificates of title to three properties. Mr Caradonna, without Mr Vella’s knowledge, took these certificates of title and used them to fraudulently obtain money for his own purposes. Mr Caradonna’s cousin acted as his solicitor and dishonestly certified the signature on the loan and mortgage documents. The lender advanced more than $1,000,000 to the joint bank account secured by the mortgage registered over Mr Vella’s property. Mr Caradonna then forged Mr Vella’s signature to withdraw money from the joint account.
Hunt & Hunt Lawyers acted for the lender and prepared both the mortgage and loan documents fraudulently entered into by Mr Caradonna.

The primary judge found that the loan agreement was void because of forgery. This meant that Mr Vella was not liable to the lender under the loan agreement. However, Hunt & Hunt had breached its duty of care to the lender. It should have prepared a mortgage containing a covenant to repay a stated amount rather than an all monies mortgage. The Court held that Hunt & Hunt were concurrent wrongdoers alongside the fraudsters, and that its liability should be set at 12.5% of the amount advanced by the lender.
The lender appealed this decision.

Decision of High Court of Australia

The majority of the High Court (French CJ, Hayne and Kiefel JJ) allowed Hunt & Hunt’s appeal. The following is an outline of the majority’s reasoning:
The appeal was allowed with costs.

Importantly, Bell and Gageler JJ were in dissent. They held that Hunt & Hunt was not a concurrent wrongdoer with the fraudsters. The fraudsters had not caused the lack of security over the properties. Rather the negligence of Hunt & Hunt in drafting the security documentation was the sole cause.
Elliott May Lawyers act for a diverse range of private lenders who are active in both the commercial and consumer lending markets. We ensure that their loans are documented and settled efficiently and effectively, often in demanding and time sensitive circumstances.
As part of our commitment to our clients we have developed our own suite of documents. This includes a composite Mortgage Memorandum which incorporates a mortgage, loan agreement, guarantee and PPSA security agreement into a single, cohesive document.  Please review our Mortgage Memorandum, which we consider to be the best of its kind in terms of the rights granted to lenders, as well as its structure and presentation, which is vital when courts are being asked to rule in favour of a lender.